***DISCLAIMER*** all the pictures in this post were taken with my crappy, yet trusty Canon point and miss camera. so take them for what they are…

ok, so the last few days – where to begin. i knew that coming here was primarily going to be about working with the kids, but i also wanted to take a week or so to actually see what Nepal had to offer. i regretted not getting out of the Kathmandu Valley last time I was here, so I was determined to make it happen this go round. so five days ago, we booked a mini vacation inside a vacation to Pokhara and Chitwan, two pretty popular areas for tourist travel. Pokhara is well known for the Annapurna Range, part of the Himalaya with great trekking, and Chitwan is great for it’s huge national park, filled with elephants, rhinos, bear, crocodiles, etc. so for not a lot of money, we booked our little adventure and were off in a private car towards Pokhara.

our first stop along the way was to whitewater raft, and while the rapids were pretty nonexistent, the lazy ride down the river was hardly dull – the scenery was amazing, the water a beautiful blue, and our guide was great. three hours (and about the cost of dinner back home) well spent. 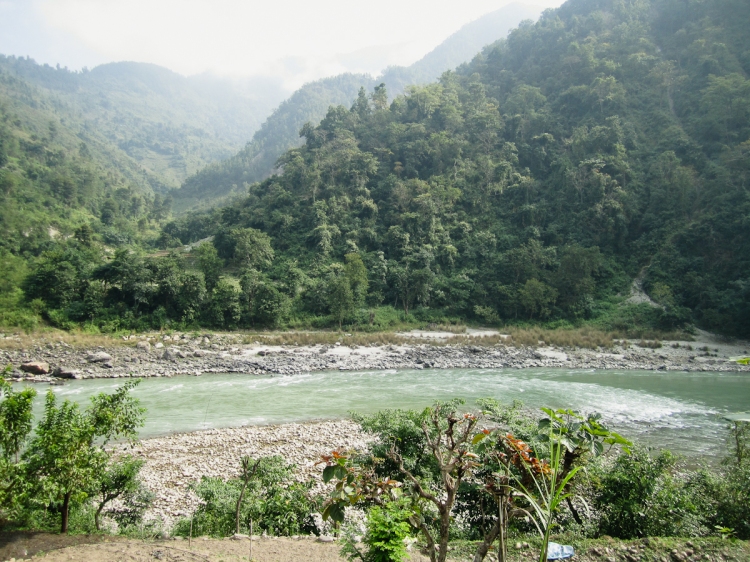 afterwards, and after changing out of my wet close behind a goat pen on the side of the road, we continued on to Pokhara. and until about thirty minutes before we hit the city, it was beautiful driving.

upon our arrival though, i have to admit i wasn’t thrilled with the area. it was dirty, busy, loud – all the things we were happy to leave behind in Kathmandu. and it was hardly the “natural beauty” everyone here said it was. but a nice dinner and a clean hotel ended the night, and in the morning we made our way up a huge hill to catch the sunrise over the mountains. we froze, but it was well worth it.

afterwards, while returning to our hotel, we received a call from the booking company recommending we leave Pokhara a day early for Chitwan. the elections here are fast approaching, and there was talk of a transit strike by the Maoist Party. in the event it happened, the roads were going to close the following day, and we’d be stranded in Pokhara. so we added one more night’s stay in Chitwan, and after a quick stop at a cave and a waterfall, we hit the road.

besides stopping at a great suspension bridge, the ride was a killer (bad). hours and hours of bumps, bumps, and bumps. and dust. but the bridge was amazing, and almost made the drive worth it… 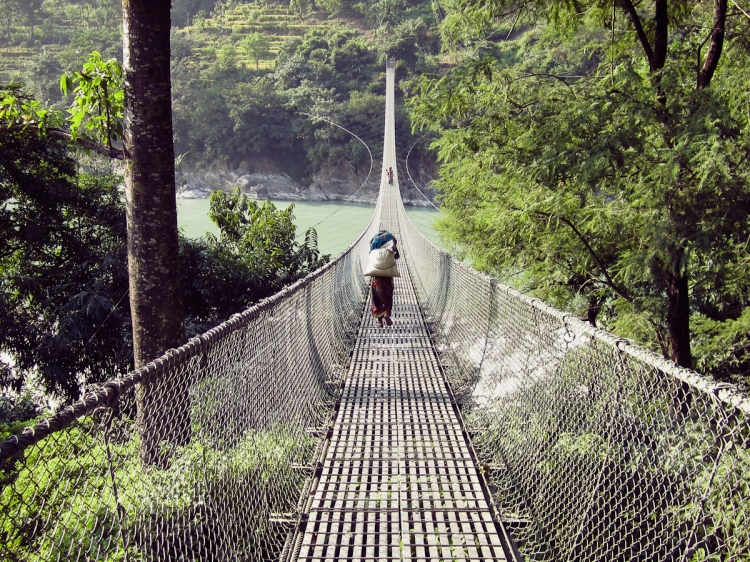 like Pokhara, driving into Chitwan left a bit to be desired. luckly, we turned off the main road, drove down a long dusty one, and ended up in a super small, quiet town we called home for the next three nights. our hotel was really nice, set right along the river and cross from the national park, and everywhere we went, we were greeted with smiles, waves, and passed by people on bicycles and elephants. it was amazing to say the least.

our first morning started off with an elephant ride, ended with a jeep safari, and neither were a let down. it felt so good to escape the hustle and bustle of Nepal and just get into nature. day two brought a canoe ride in an amazing hand carved boat down a crocodile infested river which turned into an all day hike through the national park, filled with tigers, elephants, rhinos, vipers and boa constrictors, huge spiders, bear, and tons of birds. i have to admit i was a bit hesitant getting out of the canoe on the same shoreline we literally two minutes earlier saw a huge croc resting on, and the ‘safety chat’ before the walk teaching us how to survive attacks from the various animals we’d likely be encountering along the way easily put me on edge, but when in Rome, right? and it was so worth it – amazing, amazing experience. 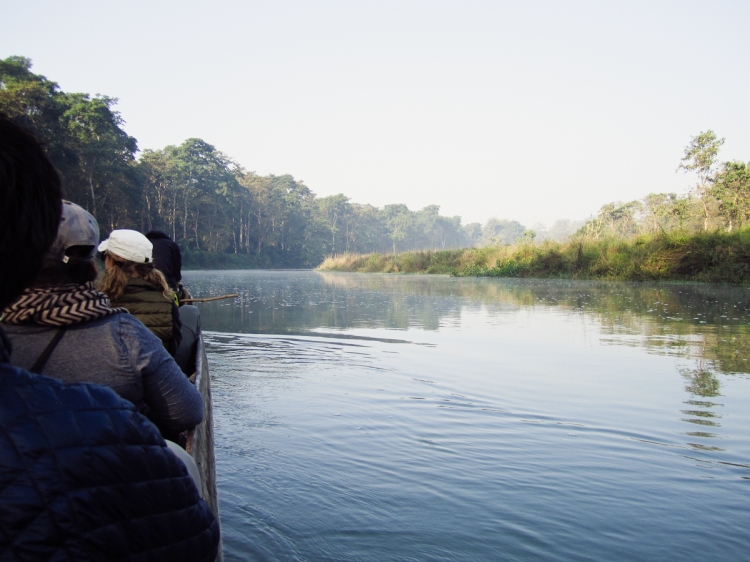 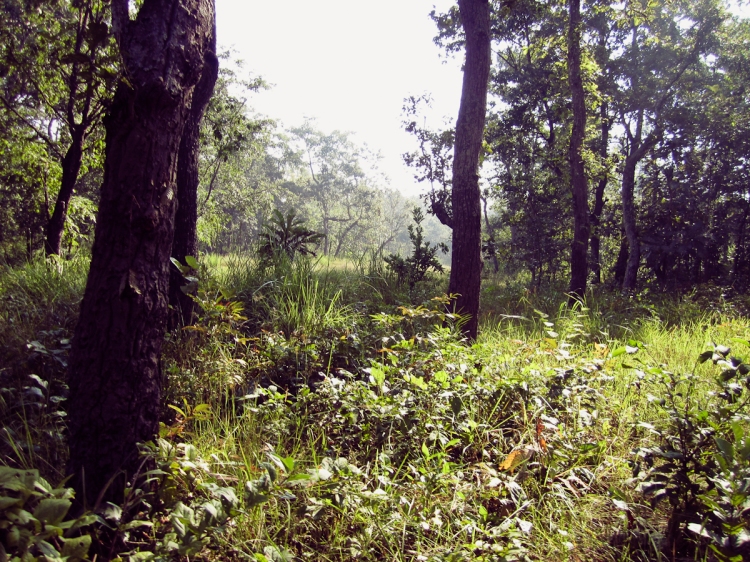 on the third day, we left out hotel around noon to catch our flight back to Kathmandu. but with the transit strike in full force, we needed to have a military escort most of the way. scary stuff really, especially since we were in the back of an open air jeep. we arrived safely though, said our goodbyes to our amazing guide Prakash, and after a twenty minute flight found ourselves back in KTM.

that was going to be the end of my sightseeing for the trip, and i was likely going to be making my way out to the orphanage pretty quickly after we got back, but Anne, Brenda, and Corby invited me on a helicopter flight to the mountains they booked as a last minute, amazing way to end their trip. i was hesitant to go to be honest – they spent a good amount of money for it, but since it was already paid for and the heli could seat one more, they insisted i went. i can’t say how grateful i am for the opportunity as it was amazing. we flew about 45 minutes up into the mountains, made a brief stop to drop off supplies in a small mountain top village, and continued on, all the way up to 13,000 feet where we had breakfast overlooking Mount Everest. like that trip to florida Ii took with my family a few weeks back, it just didn’t seem like reality. it’s certainly not something people do everyday, but it was an experience i won’t soon forget. again, a huge thank you to you three for allowing me to share it with you. 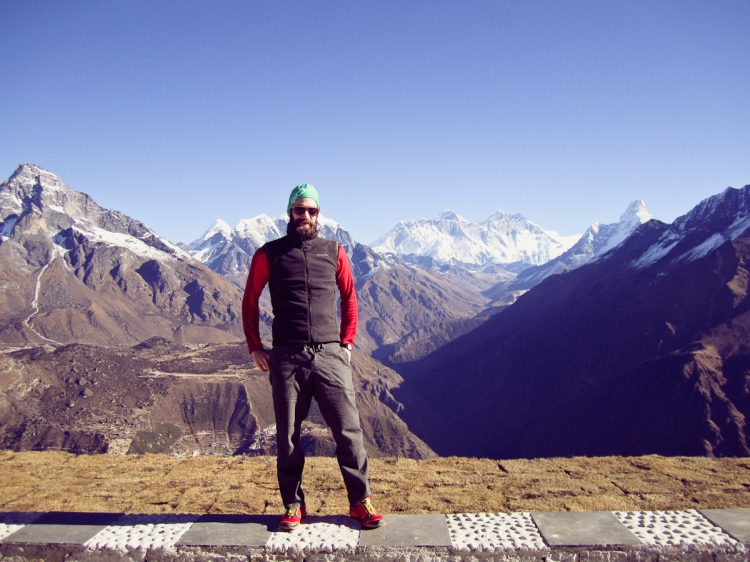 so tomorrow i’m off for the orphanage, where i’ll spend the next few weeks with with the boys and girls playing games, helping with lessons at their school, and just being there, spending time. i hope to bring you more photos in the coming days, so fingers crossed the new manager eases up a bit with the photo taking rules.

One thought on “out of kathmandu – finally”