ride a bike for certain death

it’s a scenario that happens during nearly all my bike rides, but it shouldn’t. and while it usually is a bit unnerving, today was different. today i thought i could have been killed. 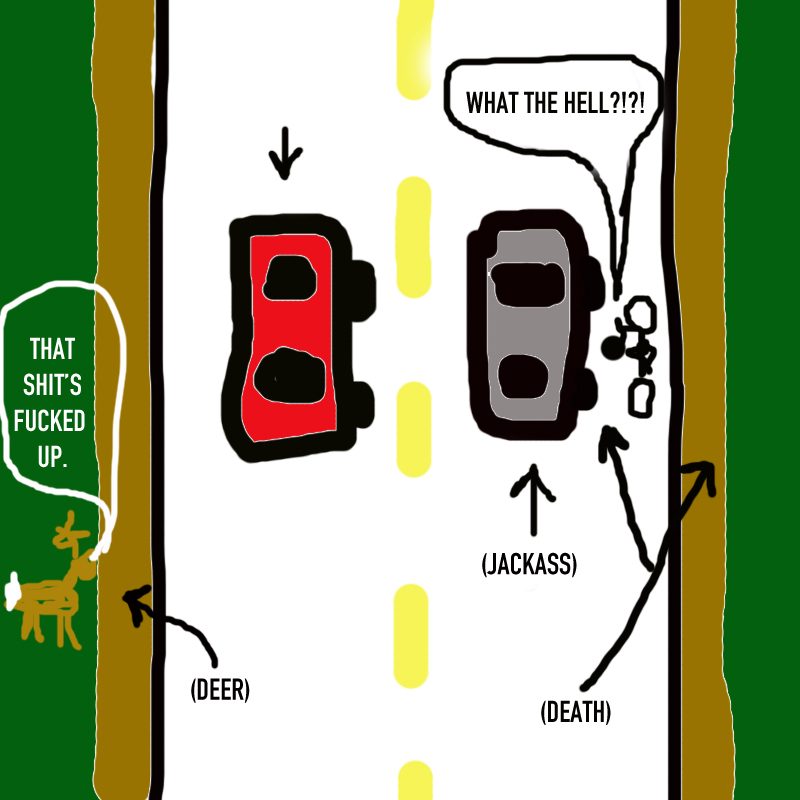 about an hour into my ride this AM, this happened. and what made it scarier was two-fold. one, the guy actually accelerated when passing me. he had to have been going 65-70 mph. second, he was so close when he passed me; saying he was two feet away is being Mother Theresa generous. enraged, i gave him the finger immediately. and immediately he slammed on his brakes. i’m talking white cloud, tires screaming emergency type stop. and in doing so, he blocked my right-of-way with his car. i stopped, and for the next minute or so stood there listening to his crazy rant. he said i shouldn’t be in the road. he called me a bitch. his face was two inches from mine. and he ended his rant with this:

“what the hell gives you the right to give me the finger?” to which i replied, “dude, you almost just killed me with your car. i think that gives me the right to tell you to fuck off.”

he then told me that until i had a license plate and a motor on my bike, there was no way he was going to respect me on the road.

shocking, right? just a rare dick you say? unfortunately, no. Jack Fucko from this morning is 95% of the cars that pass me at full speed while i’m out riding. he’s the asshole redneck that stomps on the gas just as he passes, leaving me in a cloud of black smoke. he’s the punk twenty something that throws things out the window at me, or yells rude comments. the nice, considerate people that actually slow down and wait to pass until it’s safe? they are the rare birds on the road – maybe 5% of the motorists i encounter.

while i’ll never fully understand why most people do the asshole things they do, i have formed a hypothesis or two in efforts to explain them. maybe it’s jealousy. fat person mad about seeing a fit person working out, knowing they don’t have the will power to get out there and do it themselves. or perhaps it’s a power issue. scare the skinny dude on the bike, make yourself feel more dominant. my frontrunner? the impatience / inconsiderate combo. i really believe people are so fixed on themselves nowadays they simply are oblivious to cyclists / kids / animals on the roadways. that, and they just don’t care. for surely if they did, they wouldn’t pass someone riding a bike less than three feet away driving a 3,000+ pound car at 60 mph.

disagree? let’s meet up for a game. you stand by a tree, i get to shoot a bullet past you three feet to your left. oh, and stand with your back to me. it’s the same thing really. both your car and my bullet are affected by wind, mechanical stability, human judgement (and error). and both are deadly in the worse case scenario.

← training update
i need your help. →

5 Comments on “ride a bike for certain death”