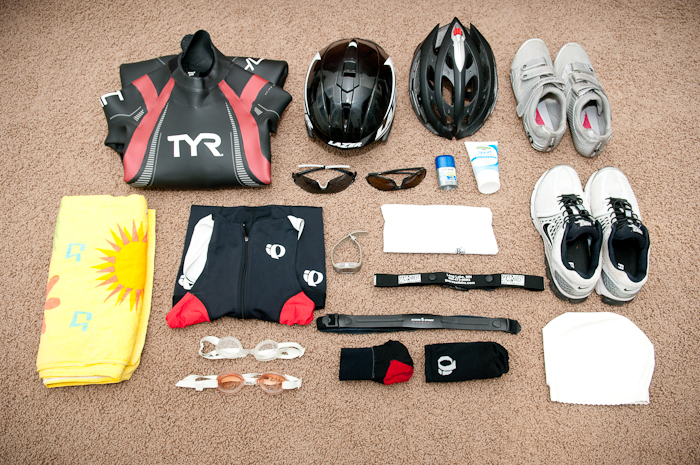 this SUN, i’m racing the chisago lakes half iron triathlon in chisago city, mn, which consists of a 1.2 mile swim, 56 mile bike, and 13.3 mile run. i figured since i’ve put my traveling on hold while i’ve been training for this race and ironman wisconsin in madison this SEP, i’d put up a few posts to let you know how things are going. and because my ‘packing list’ posts are always of fav for some of the readers of this blog, i thought i’d write one with my race gear.

swim: (i’m pretty sure this is a wave start, so you run from the shore with about 30 other athletes)

-tyr hurricane 5 wetsuit
-pearl izumi select one piece tri suit (i’ll wear this under my wetsuit during the swim, and it’ll stay on the rest of the race for the bike and run. no wardrobe changes = faster overall time.)
-tyr goggles (2 pr)
-sigma pc-9 heart rate monitor. i’ll wear this the entire race and base my efforts on the bike and run primarily off my heart rate.
-tyr swim cap. they’ll issue a cap i’ll have to wear, but i’ll wear mine under it with my goggle straps between the two as extra protection against kicking feet / swinging arms during the swim start.

bike: (the transition from the swim to the bike (called T1) should take about 3 minutes tops) 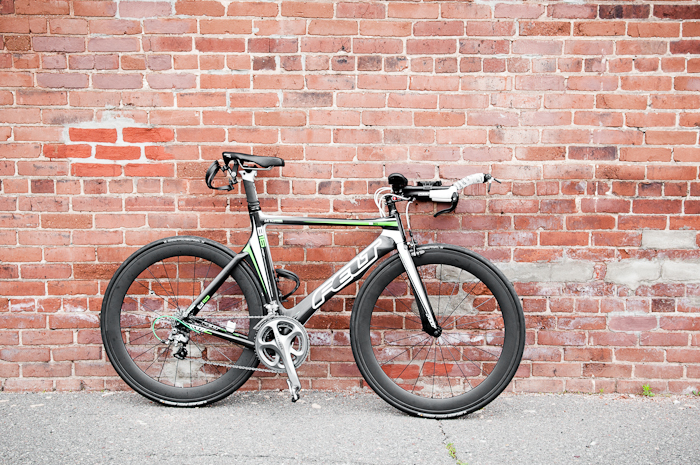 -felt b16 with boyd 58 carbon clincher wheels. i’ve spent countless hours on this baby over the past three months, and finally feel like it’s dialed in. oh, and did i mention this bike is fast?
-CO2 cartridge, extra tube, and tire levers (all stuffed under my saddle) in case i get a flat.
-pearl izumi shoes. i’ve had these for four years, and wouldn’t dream of getting a new pair. they fit like a glove, are super stiff, and breath really well.
-lazer tardis / genesis helmet. i’m bringing both and will decide which one to wear on race day. the tardis is very aero, but is hotter than the traditional helmet pictured on the right. if it’s african hot, the cooling vents of the genesis helmet will win over the aero benefits of the tardis.
-smith pivlock v90 shades. super light, super comfy glasses. i have three different lenses to pick from depending on the light conditions, and i’ll wear these through the run as well. swarms of black flies / sensitive eyes make these a must. (and i’m bringing a second, older pair just in case)
-pearl izumi socks
(i’ll still be wearing my one piece race suit and HRM mentioned in the swim section)

run: (this transition (T2) should take less than a minute, meaning i hope to be running less than 60 seconds after jumping off the bike)

-nike vomero 6 shoes with YANKZ! laces. the laces are elastic and don’t need to be tied, can’t loosen or untie during the run, and are way more comfortable than regular laces. plus, you can literally put your shoes on in about 4 seconds and be off running in no time.
-buff headband (cut in half)
(i’ll still be wearing the one piece, HRM, socks, and shades)

-the most obnoxiously loud towel i could find to put on the ground in my transition area. this does two things:
1. it keeps your feet relatively clean so you don’t have sand and grit on your feet during the ride.
2. it makes it easier to find your spot coming out of the water. the bike racks at this race are really tight, making it really hard to find your bike.
-nature’s gate sport spf 50 sunblock. this stuff clings like superglue and lasts for hours despite sweat, water, and friction caused by my race suit.
-body glide. i really don’t use this stuff a lot, but it’s nice to have if something starts rubbing or chaffing which can make for a miserable day.

i’ll likely eat two pieces of whole wheat toast with natural peanut butter, two ensure, and half a banana two hours before the race. i’ll then sip water until the swim start at 7am. on the bike, i’ve found fig newtons are really the only food i tolerate well enough to be able to run off the bike, so i’ll eat 3 of those per hour which is 165 calories. add that to the GU Brew electrolyte mix i’ll sip on throughout the ride, and i should be getting around 230 calories per hour. i’ll also be drinking 20oz of plain water per hour on the bike. the last 20 minutes of the bike, i’ll only drink a small amount of water, and will only sip water throughout the run. my stomach can’t handle food or sport drinks during the run, but the calories i take in during the bike will be enough to get me through. at least it has in my training to this point. post race i’ll drink two ensures, and i’ll try to get down some small snacks like pretzels, etc.

i think that’s it. i’ll let you know how things go with a race report next week sometime.