the last few days have proven to be the busiest of the trip by far – not a bad thing, but it just seemed like i had way too much to do yesterday and today.

above is a photo of mount everest i took during the mountain flight i went on SUN morning. it wasn’t greatest thing i’ve ever done (the plane was super small, old with crappy windows, and i didn’t have the best seat), but it was neat to see the mountains. plus, even though the viewing conditions weren’t the best, they were still pretty spectacular.

i was home by about noon, and spent the rest of the day hanging out with the boys and Dora, a new volunteer from China. we tried to fold origami, but failed miserably, so i ended up teaching all the boys how to make paper throwing stars instead. they turned out to be a huge hit as they love all things fighting, karate, or martial arts. later that evening, Bikash, Shiva, Nabin, and i went to collect stones down by a small creek that runs in front of the house. we were later joined by a few more boys, Boxer, and Seti, the neighbor dog, where we had a rock throwing contest. 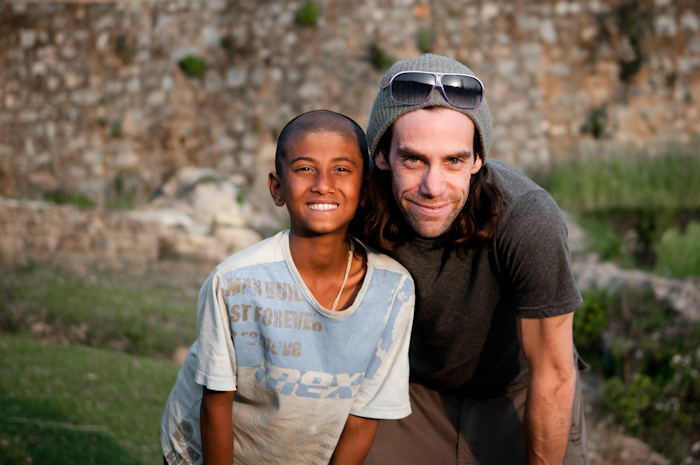 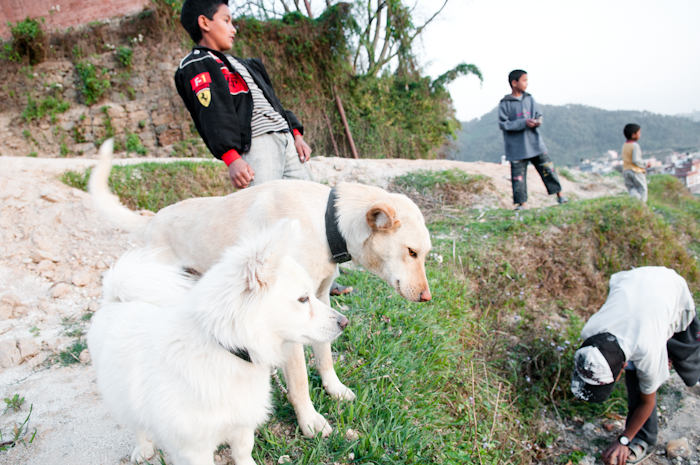 that night, i was able to shoot photos of all the boys, Goma, and Rabindra for about an hour, and should have enough to finish the project i am working on. i’ll share two fun ones – these aren’t going in the project, and everyone wanted to try to make a few photos with the light set up, so like the canyoning pictures, you’ll have to look a few with me. 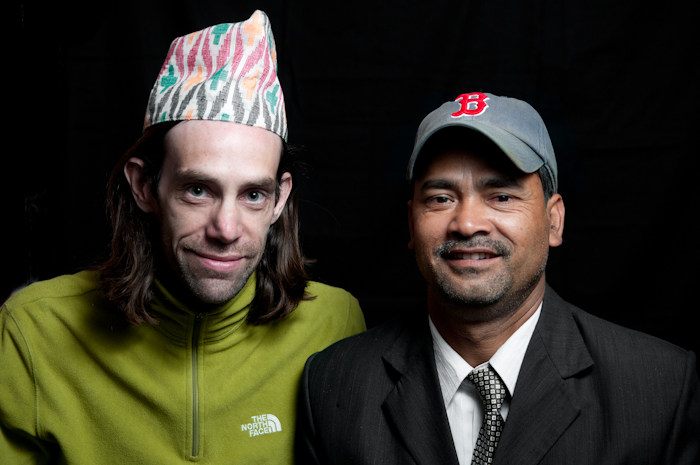 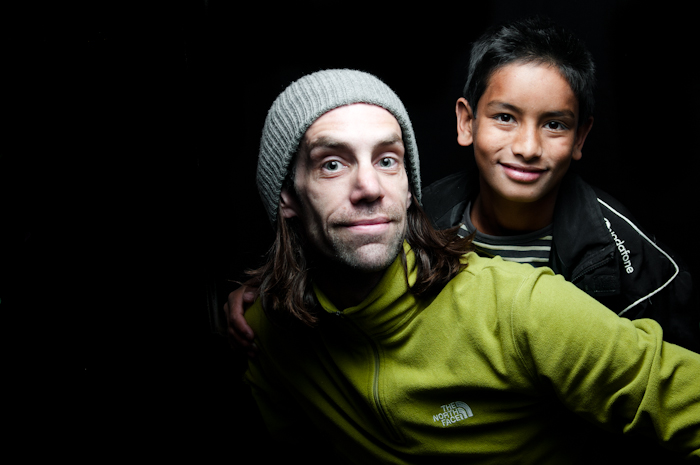 MON was the first day of the new school term, and in true fashion for any morning before the first day of school in any country i’m sure, everyone was frantically running around the house trying to find backpacks, shoes, and uniforms (the new ones weren’t ready until MON afternoon) last minute. i found myself on the front step at about 8:00 sewing buttons on about 6 of the 10 boys shirts and Rabindra was on the sewing machine fixing backpacks and ripped pant seams. finally finding everything they needed, the kids were off to school at about 9:00. 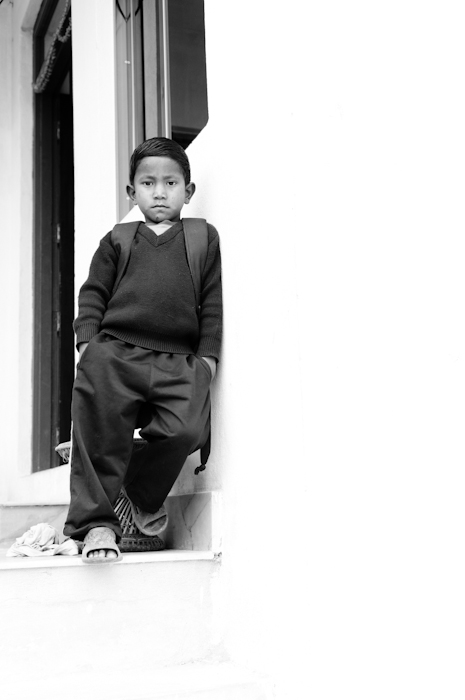 at about 10:00, Rabindra, Dora, and i went to the school where i met the principal who i swear was Jesus’ twin nepali brother, toured the school and got to watch a few classes for a bit, and purchased the texts. i love how Manoj, who has the worst ADHD, spotted me and smiled big when he saw me taking a picture. 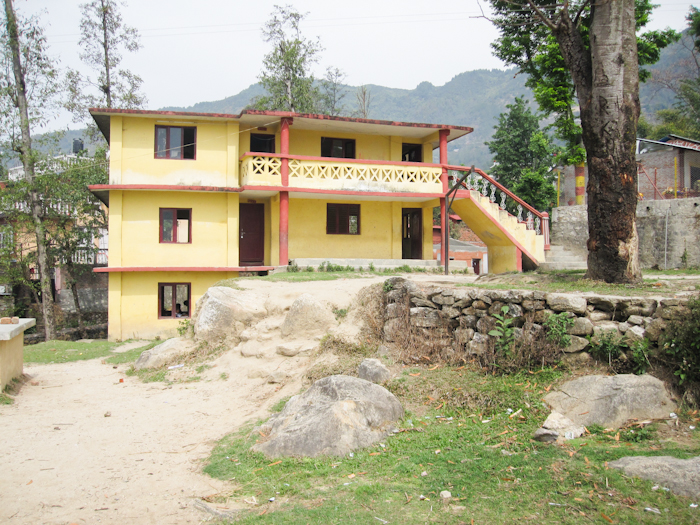 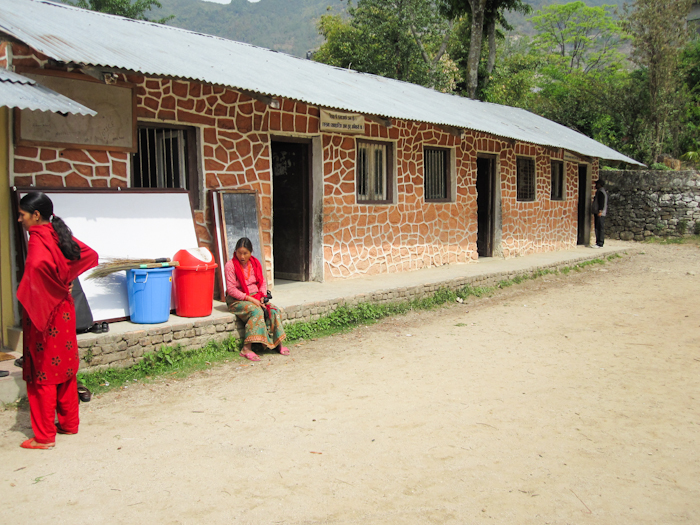 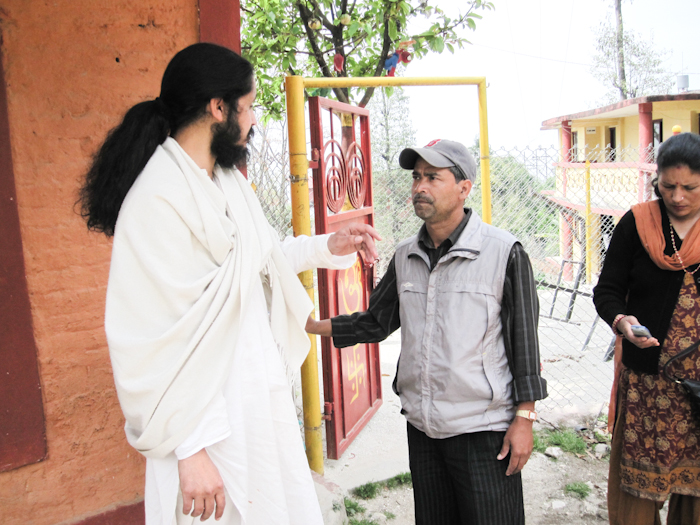 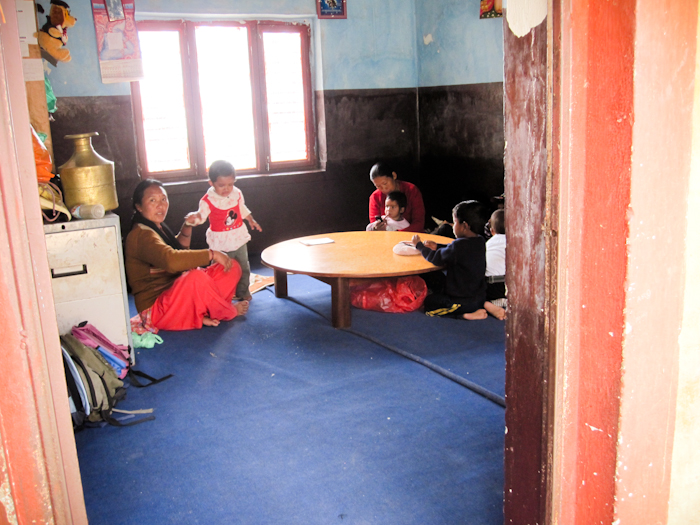 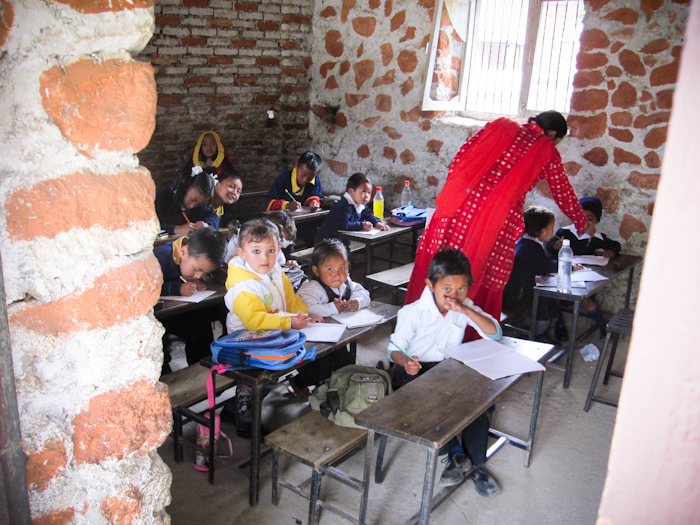 at noon, the boys were let out of school, and brought home the nice surprise of Manoj limping and in tears with an injured ankle. he was in real pain, and Rabindra said we could get an X-ray in Budhanilkantha. great, except the power was off and the clinic wouldn’t be open for a few days. he was in real pain and we had no idea if it was broken. plus, it was fairly swollen at this point, and he couldn’t wiggle any of his toes nor move his foot without crying out. so i told Rabindra to call a cab so we could take him into the children’s hospital in Kathmandu and not to worry about the cost as i’d cover it. although he was hesitant, he finally made the call and we were at the hospital about 45 minutes later. 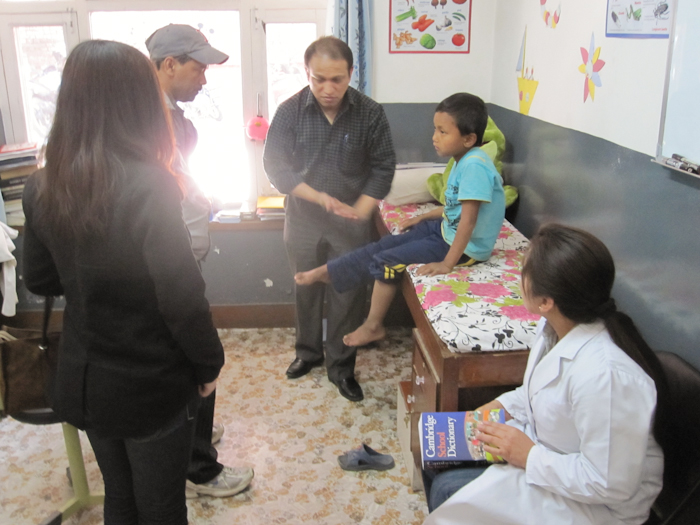 luckily, it wasn’t broken, but they still put him in a cast for the next week to give it a chance to heal. i was amazed at the efficiency of the hospital. Manoj was into the exam room within three or so minutes of our arrival getting an exam by the doctor, and the X-ray was done about three minutes after that. maybe 20 minutes after we got there, he was in his cast, and we were waiting in the cab for Rabindra who was filling two prescriptions. all said and done, the whole process took about 30 minutes and cost a whopping $27.00 – for everything. the X-ray was about $4.00, the quality of care seemed excellent, and the doctor took the time to repeat everything in English for Dora and me as well. so yeah, no comment about that in comparison to “the best healthcare in the world.”

last night i had hoped to get a group photo before the sun went down, but like all things here, it just didn’t happen. so i had to resort to using a light i brought with which was just about the biggest undertaking one could take to get a group photo. Dora held the light when i wasn’t in the photo, but we were short one person when it came time to get me in the photo. by chance, some teenagers were playing futbol down the hill, so i ran down and asked one to help. so, with Dora shooting, and some random kid as her assistant, i was able to get a group photo. it’s not the best, but it’ll do.

(oh, and the white and black uniforms and white shoes are the new ones – spiffy, right?)

today, after helping get the boys ready for school, i was picked up by one of the volunteer placement staff members and went into Kathmandu to make a few photos for their organization. they are redoing their webpage, and asked if i could help them with a group photo / individual portraits for their “staff” page. before i left, they wanted a group photo with me: 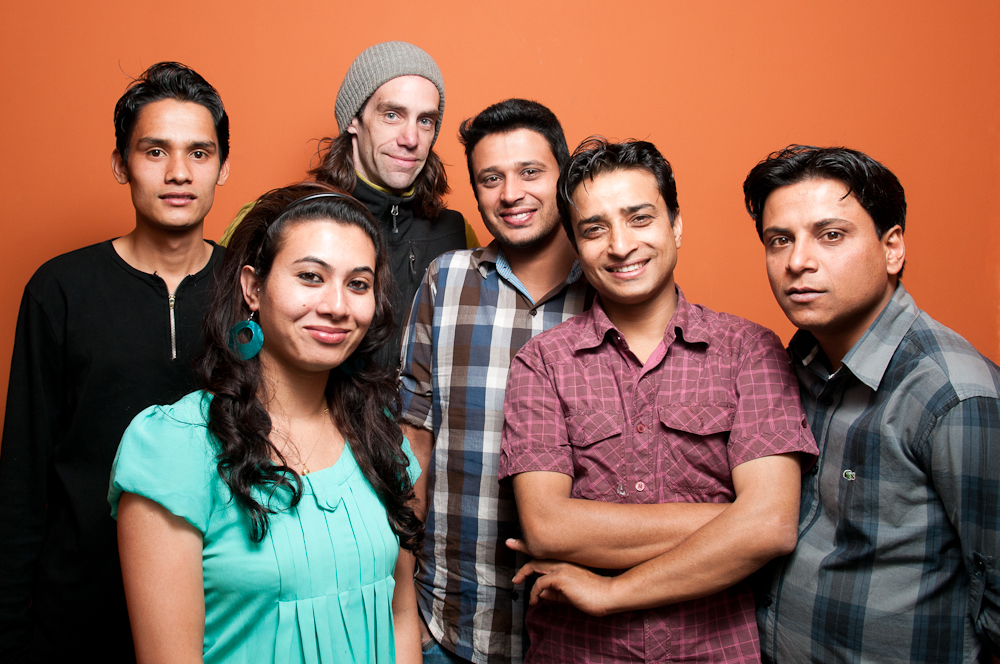 once back at the house, i had enough time to chat with Goma about her shopping trip to town with Dora to buy supplies with 5,000 rupee i had given her from the donation money to pick up soaps, toothpaste, etc. she was excited to show me the loot.

she also got a bag full of bars of soap (there must have been about 50 in there), and had the biggest smile on her face for the rest of the day. shortly after, Rabindra and i ran Manoj back to the hospital for a follow-up (included in the $27 paid yesterday), and we were back to the house by about 5:00. having to catch my plane by 9:00, and needing to set aside about one hour for the taxi ride and two hours to check-in, i only had an hour to pack and say goodbye. i was given a traditional Nepali send off which a family does every time someone leaves for a big journey, and was given a traditional Nepali hat by Rabindra. 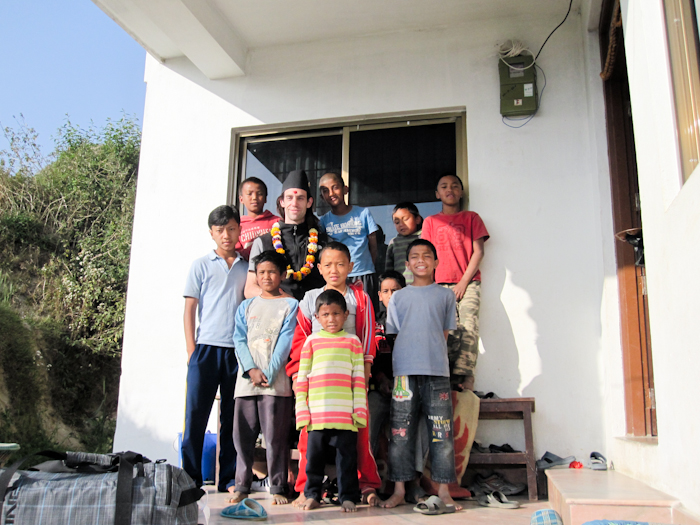 i said my goodbyes, which was made all the harder when Bikash whispered in my ear “no smile, sad you leaving” when Dora said “say cheese” taking the group photo above. not wanting to get into it now, i’ll just say my feelings were mixed – it’ll be good to get home, but there are things i’m going to miss like crazy.

i’m currently sitting at the airport in Abu Dhabi waiting for my flight to Chicago, it’s 3:14 am, and i’m wide awake – nothing new. after getting settled back home, i’ll be posting up some more thoughts, so check back shortly for that.